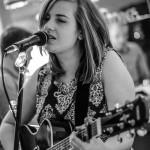 Heavily influenced by Amy Winehouse in her ‘Frank’ era, Lana Del Rey and Etta James, Kimberley writes her own songs and loves to play soulful covers.

The list of places she has played includes: Sabrina Boat, The Mytton and Mermaid Hotel, The Silverton Hotel, PorterHouse and The Lion and Pheasant Hotel in Shrewsbury to name a few. She has also played at weddings and private functions.

A typical gig will consist of two sets, the first an acoustic set and the second has more of a lounge feel to it with jazz standards and some more modern but relaxed songs.

From Foo Fighters to Frank Sinatra, her music suits hotels, cocktail bars and restaurants for discerning audiences of all ages.